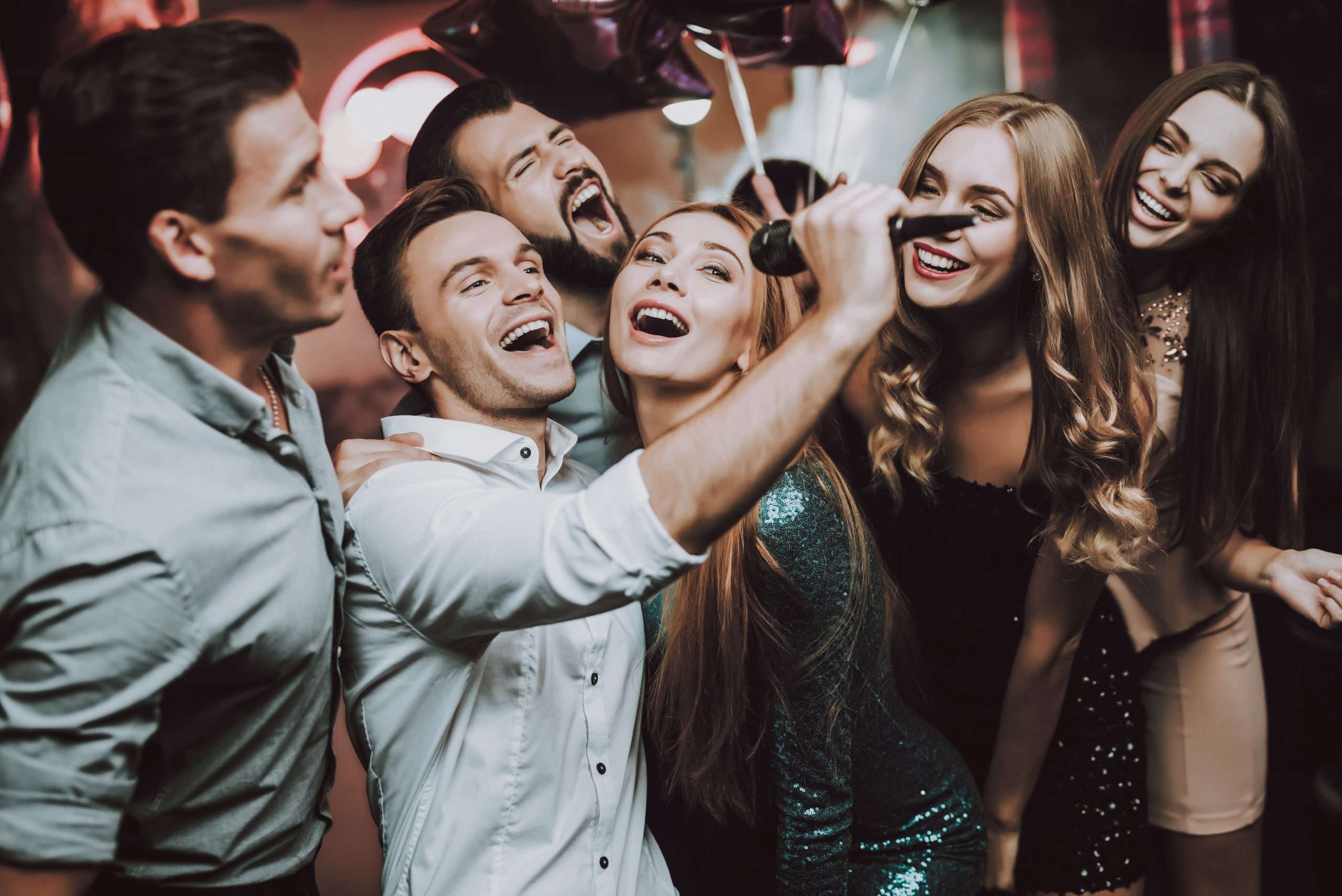 From crooning slow jams to belting out rock anthems with friends, karaoke is a classic night-out activity. Getting on stage and singing your heart out is a beloved pastime worldwide. In fact, it’s so popular in the Philippines that in 2020, a provincial governor asked the public to report late-night karaoke singers to the authorities to help enforce the coronavirus curfew. Not even a global pandemic could stop karaoke lovers from singing all night long, much to their neighbors’ displeasure.

The karaoke phenomenon is global, with bars, clubs and house parties hosting the singing machines. We love to gather around karaoke machines and perform for our friends. But what are the origins of karaoke? Keep reading to learn more about the history of karaoke and how this unique, high-energy entertainment got its start.

Where Did Karaoke Start?

Though karaoke has become a loan word everyone knows, the term “karaoke” means “empty orchestra” in Japanese. It’s a combination of two words — the first half of “karappo,” meaning “empty,” and the first part of the Japanese word for orchestra, “okesutora.” A backing track with no vocals is typical for karaoke — where you provide the singing — but some types of karaoke do have vocals on the track to help guide participants.

Karaoke is well-known nowadays, but it started in Kobe, Japan around 1971. Bars would lease the machines, and their patrons would sing into the microphone well into the night. As a precursor to karaoke, there were sing-along shows like NBC’s Sing Along with Mitch. This show and others like it featured television hosts, a chorus and lyrics at the bottom of the TV screen so viewers could sing along to their favorite tunes.

There is some dispute regarding the invention of the first karaoke machine. As with most technology, various people altered and improved karaoke machines as technology advanced, with track queues and other features created by several different minds. However, three men are credited with independently inventing the karaoke machine at different times.

In 1967, electronics factory owner Shigeichi Negishi had the karaoke machine invented because he loved singing as he walked around his job. Negishi requested that his head engineer hook a microphone amp and a mixing circuit to one of the 8-tape decks the factory produced, so Negishi could hear himself singing over his favorite songs.

Dubbed the “Sparko Box,” Negishi and a distributor tried to lease the machine to bars, although they had trouble competing with local guitarists, called nagashi. They eventually decided against patenting and producing more due to distribution issues.

Later, in 1971, Kobe musician Daisuke Inoue would also invent the karaoke machine after being overbooked by clients. He would record instrumentals in keys that were less difficult for clients to sing and give them out as backing tracks for events he couldn’t attend. Seeing the advantages of this design, he commissioned a coin-operated machine that would give patrons a few minutes of singing time. After paying hostesses to sing on the devices, they eventually took off, beginning the karaoke craze that we know today.

Finally, Roberto del Rosario invented the Karaoke Sing-Along System in 1975. The Filipino inventor is credited as the only holder of the karaoke machine patent and is partially responsible for the popularity of karaoke in the Philippines today.

Karaoke boxes, found in karaoke bars and other socially-oriented businesses, took the open-air karaoke concept and made it more personal. Instead of singing in front of a whole bar of strangers, groups can use private rooms to host social gatherings. Karaoke boxes create privacy and allow even more people to participate in karaoke. With karaoke boxes, patrons can sing with their close friends and family at any time of day.

Since karaoke boxes use private rooms, it means they can be attached to restaurants, hotels, bars and even shopping malls. They are soundproof, ensuring you only hear your own party and don’t disturb other guests. Karaoke boxes are also more customizable than karaoke machines at bars since customers can book a themed karaoke box for a unique, private experience. Now groups can perform for their party, letting loose with close friends and enjoying exclusive use of their karaoke machine.

Karaoke in the U.S.

After taking off in Japan in the 1970s and 80s, karaoke made its way around the globe, eventually arriving in America. The history of the karaoke bar in the U.S. is said to have begun with Los Angeles bar Dimples in 1982, a famed establishment that has since closed its doors.

With technological advancements like the videocassette, CDs and eventually music downloads from the Internet, karaoke became an accessible, easy way to have fun. Today, the U.S. market size value of karaoke bars is around $1.3 billion. Karaoke is here to stay and will always entertain parties anywhere.

Today, karaoke is a global form of entertainment. People of all ages gather around karaoke machines at bars, online and even in their homes to sing with each other. Karaoke isn’t just a fun activity — some karaoke singers get competitive:

With increased demand comes sophisticated production, and karaoke machines are no different. Due to licensing agreements, karaoke tracks are actually reproductions of the original song, made by a karaoke producer specifically for the sing-along. Now built and distributed by professional companies, karaoke machines sit in bars and homes and even work with smart devices. Whether you’re out to win a karaoke trophy or want to let loose with friends, karaoke is the perfect entertainment for any event.

At LALA St. Pete, our private, themed karaoke rooms are a fun, fresh way to spend your time out. Enjoy locally sourced, made from scratch food from our delicious French Mediterranean and Classic American menu while singing your heart out. After performing with your friends, head out to our shared activity garden, try Grand Central Brewhouse’s select craft beers or enjoy signature cocktails from our rooftop bar.

Want to host a corporate event or a private party? Book any of our spaces or party rooms and host your event. At LALA, our expert staff will ensure you receive luxury service at an affordable price.

Stop by and see our live music and entertainment and contact us today to reserve your table at the most unique venue in St. Petersburg.